My Opinion on Mario Kart 8 Deluxe 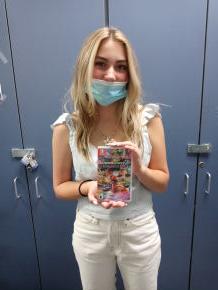 A senior holding a copy of Mario Kart 8 Deluxe.

Mario Kart 8 Deluxe is a great kart racing game. It is a fun, entertaining, and enjoyable experience. However, just like any other video game out there, it has its fair share of pitfalls. Trust me, no video game is perfect.

First and foremost, it is important to know more about the game and the basics. Mario Kart 8 Deluxe, as some people may know already, is an enhanced port of Mario Kart 8 for the Wii U. It was released on April 28, 2017.

The game retains Mario Kart series mechanics such as drifting and using power-ups. That is one thing about the game I enjoy. I also like the selection of kart parts, wheels, and gliders. I was not, however, expecting the inclusion of Mercedes-Benz vehicles. That was so unexpected, but it was also really cool.

The items in the game are also interesting. The Super Horn is very much appreciated. If used at the right time, it stops the Spiny Shell from hitting the racer in the first place. That, in my opinion, is a huge improvement. The previous games never had that feature. The Fire Flower, on the other hand, is meant for the linear Mario platform games, not for Mario Kart.

I love that the Boo item came back from Mario Kart DS. The Feather item allows players to gain a short hop. It also lets them pop their opponents’ balloons in battle mode. One other feature in Mario Kart 8 Deluxe is smart steering. It makes the gameplay a lot easier for new players, especially in 200cc.

Grand Prix races, on the other hand, aren’t quite so fun. I despise them with every bone and fiber in my body. In most races, I mess up at the last second and end up not finishing in first. My lowest position is 10th place.

However, it was 200cc. I cannot expect to do insanely well. GBA Ribbon Road was not an easy track in Time Trials. I was trying to pull off all three shortcuts. The shortcut toward the end of the track was not very difficult. The two ramp shortcuts, on the other hand, were the exact opposite of sweet and simple.

I threw so many attempts at those shortcuts. I kept falling off the track when I was trying to pull them off. I was becoming more and more frustrated as I threw attempt after attempt at those intensely frustrating shortcuts. They were incredibly irritating. I do not wish to even think about them.

“I have played Mario Kart 8 Deluxe when it first came out,” senior teacher assistant Skyler McKenzie exclaimed. “I love the competitive aspects of the game. However, I think the blooper is really annoying. My favorite game mode is Grand Prix. My favorite character is King Boo because that is who I played when I was a kid. Overall, I think Mario Kart 8 Deluxe is a really fun game for the Switch.”

Mario Kart 8 Deluxe, while it has its downsides, is a really fun game on the Nintendo Switch. I love mostly everything about it. I would definitely recommend this game to anyone who owns a Nintendo Switch and is a fan of Mario.