The Jetstream Journal • May 6, 2021 • https://thejetstreamjournal.com/29587/feature/a-curtain-closed-the-performing-arts-wrap-up/

A Curtain Closed: The Performing Arts Wrap Up 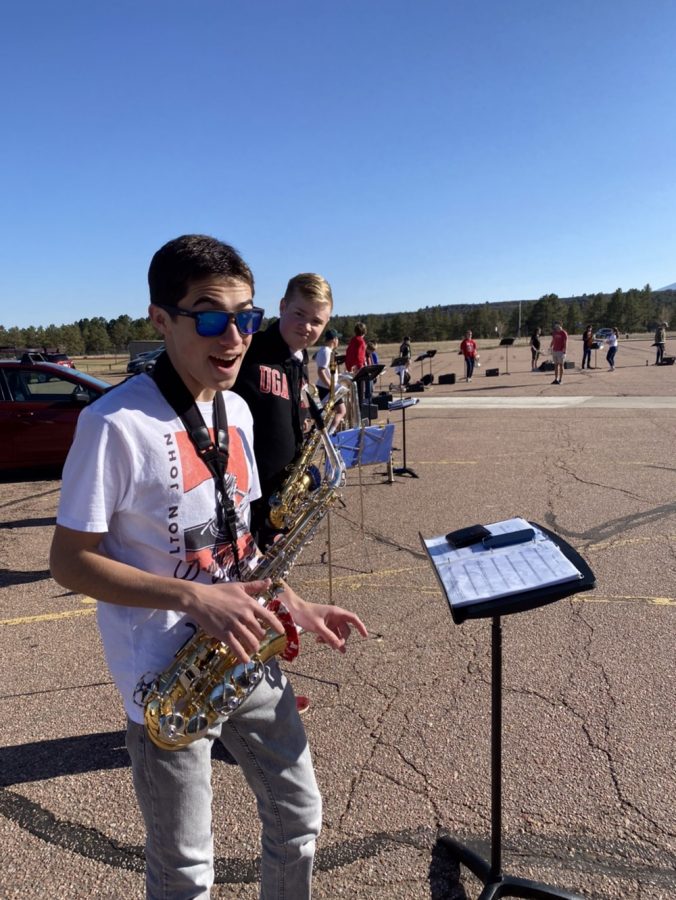 The sounds of rushing feet filling the hallways, instruments coming together under bright lights, sharp scents of acrylics, the gentle whoosh of a curtain opening, and the thrill of finally having something to show after months of work.

Loans-Cash.Net
The academic school year is coming to a long-anticipated close. For most students, this means exams and long hours spent on missing work, but for visual and performing arts students that simply isn’t the case.

As a band student myself, I know that a lot has gone into continuing to do what we love here at Air Academy with so many COVID restrictions. Music teachers Joseph Musick and Vanessa Lyttle have put their all into making this year the best it could be. With the marching band season having been pushed farther out, band students are still working to perfect their show and prepare to play at the 2021 graduation on May 26.

Band isn’t the only performing arts class that has managed to prevail during this school year. Despite the challenges that came with groups of people being quarantined this year, the theater class managed to put on an amazing performance of School House Rock that was available throughout April, featuring masks and gloves.

The wrap-up after this crazy year has been difficult on every student, but as most art classes require a great deal of hands-on and personal feedback we’ve been out of the game for the majority of the year. It wasn’t until the second semester that performing and visual arts classes managed to find their footing.

Shifting classes like art and theater where there is a heavy emphasis on a group setting to an online environment was very challenging as an art teacher, specifically for Charlie Graybill who discussed these challenges with me during his interview.

Although being a new teacher and not knowing them for more than a semester, he expressed pride in his students for still placing in the district art show.

Luckily for art students, even with the difference in the way the classes are run, many of the things we enjoyed about our school year have stayed the same. From personal experience, the band has managed to maintain the friendly and productive atmosphere we’ve always enjoyed, while the musical was proof that the theater students have done the same.

Persevering during this challenging year was harder than anything we’ve had to face before in our time as high school students, but many seniors agreed that after a year like this they’ll be ready for anything that they might face in college and beyond.

I doubt that anything will be able to shake the Air Academy spirit- aside from maybe finals, of course. Congratulations to the performing and visual arts students for a job well done and a year to remember.