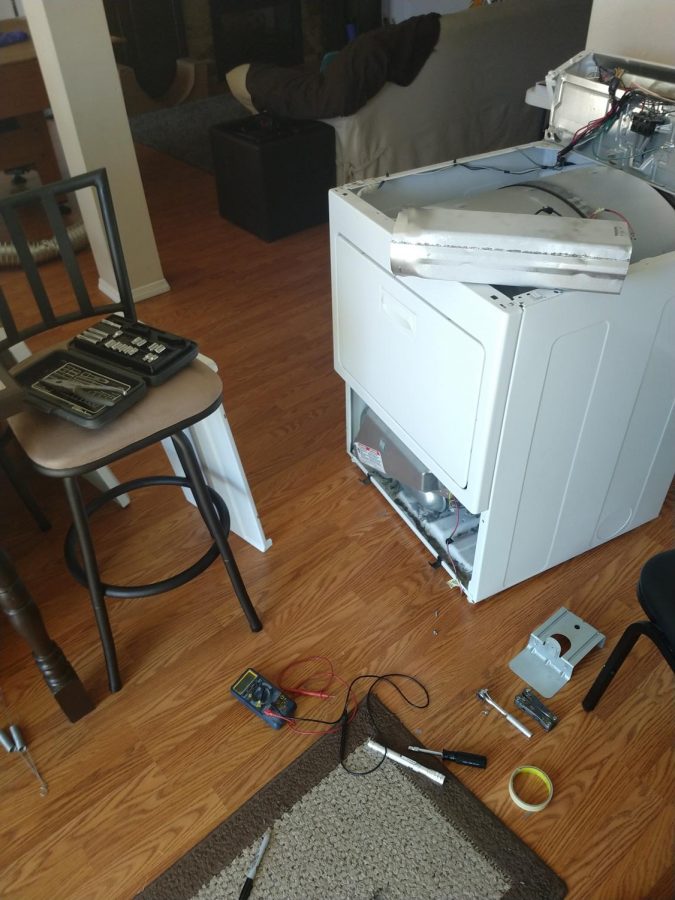 The Maline's deconstructed dryer sitting in the messy basement before the new heating element was wired in and the machine re-assembled.

It’s 6:30 pm on a chilly, late fall Thursday evening, my Mama and brother were in the process of making dinner when I arrived home from indoor track practice. My dad was working on his laptop on the couch, completely engrossed, as most engineers are when working on anything. As I hobble up the stairs out of fatigue and soreness, I hear my mom complain about how the water from the sink just isn’t getting warm. I thought of how the shower I took that morning was a dissatisfactory lukewarm: nothing to complain about but certainly not warm enough for first-world standards.

I believe the realization that the water heater had gone out hit me right as my dad shot up from his work to investigate, likely with the same thoughts.

Just like in “A Christmas Story” where when the furnace goes out, the Parker family is in sullen silence as the father storms downstairs and assesses the damage in a torrent of creative words; the Malines stood wide-eyed and silent, awaiting the indistinct mutterings of an argument and stern reprimanding of a malfunctioning household object followed by a verdict of my father’s investigation.

I froze on the stairs as if my statue-like state would prevent me from being roped into fixing it, but it didn’t save me from the inevitable.

“Alex can you go get the pipe wrenches, pipe cutters, and the blow torch?” my dad shouted from the basement.

I hung my head as I replied, “Will do! First I’ll put on my work clothes though.”

Once behind my closed door, I found myself inaudibly muttering in a similar manner as I put on my scuzzy clothes to go help, knowing the rest of the night now belonged to the water heater.

On the one hand, I had no doubt we were going to have this fixed in less than a period of 48 hours. On the other, I knew that my dad and I would be lying on the floor in the cramped and cluttered laundry room, surrounded by a labyrinth of parts, tools, and instructions for hours tinkering about until we have gotten as far as possible or finished entirely. I knew that I would need to hold the flashlight just right, know which tool or part to grab based on my dad’s hand motion, be the official “hold this” man, be some extra muscle and set of hands, and be the chauffer to Home Depot right before it closes.

We did get the water heater out and a new one installed in less than 48 hours, with Home Depot being the limiting factor on how fast we got it done. If we had already gotten the water heater before removing the old defunct one, the switch would have taken less than four hours, from breaking out the tools to putting them back.

Of course, projects never go that smooth; we finished the install at around 2 AM the following night the heater died, after many attempts to get things just right. I can confidently say that a speedy exchange would be the case if we were to do a top-speed attempt.

That is usually our attitude after a project; “Next time that will be super easy.”

My dad and I often use Google and Youtube in combination with his engineering wizardry to find out how to get things done or diagnose a problem. We still often mess things up or decide something isn’t actually worth the effort and time–but at least we tried. There are few projects that don’t require at least one Home Depot trip. I can look around the house in which I live and remember every little thing I had a hand in improving or fixing. It brings a chest-puffing American D.I.Y. pride when I see my family’s work.

I look around any room in the house and remember things like the times my dad and I found some questionable craftsmanship of the past or the crazy solution we came up with to finish a project. I remember the times we jimmy-rig tied over-sized objects to my car and crammed my trunk full of broken or trashed bits and pieces of whatever we worked on to put in dumpsters in the cover of the night because the trashmen won’t lift up a 400-pound bin of shattered tile, sawed up panels of cement board, a room’s worth of drywall, a toilet, a sink, and 40 gallons of shop vacuum contents. I remember reaching or squeezing into dark, cramped, sometimes gross places for the good of the project.

When I remember all of that I think of things such as: “I would have no problem doing that again,” or “that wasn’t so bad,” or “It turns out there was, in fact, a better way,” or “I will never do toilet plumbing again.”

When I was little I would LOVE to help my dad with projects. I would be so excited to get out the tools and try and do a man’s job in his shadow. I became his right-hand man with all projects big and small, learning along the way. I still love helping, though now it is more of a “Let’s get it done, so we can attend to our other matters of business.”

“Whenever something breaks, stops doing its job how it was intended, or somebody brings me something that is malfunctioning, I always have the engineer’s pride of knowing I very well could do it, but do I want to dive in? Engineers, when taught well, always do what they can or what it’s worth to see a mission through. Engineering can sometimes be a struggle with other people’s unwillingness to even try fixing something because of their own state of mind regarding their technical competence,” said Air Academy High School engineering teacher (and proud Colorado University Engineering major) Jason Buhler.

Now, on my way to being a civil engineering major at Colorado School of Mines, there isn’t much I’m afraid of tackling home improvement or machinery maintenance-wise; whether by myself or together with my dad. I won’t even go as far as saying I’m naturally mechanically inclined. The willingness to break out the toolset, get some dirt under your fingernails, get those knuckles greasy and tackle something head-on is what makes the difference.