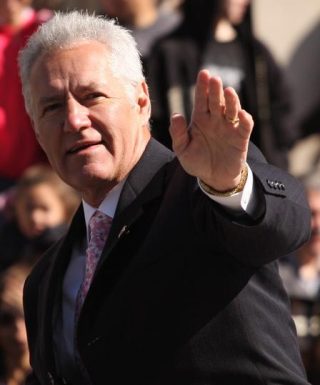 Alex Trebek waves to the crowd at a 2009 event. Labeled for reuse by Wikimedia Commons.

The Future of Jeopardy!

Jeopardy! host, Alex Trebek passed in his sleep on November 8th, 2020, due to complications involving his pancreatic cancer.

He had taught people knowledge through a fun game show for over 30 years.

He may be gone, but his spirit will live on.

The producers of Jeopardy! need some time to find a new host. This may bring a chance to consider what the people want for a host, especially those who have been watching for decades.

This show without the renowned host will never be the same, which many people believe, like science teacher Nathan Chisholm, stating, “I’m not sure it will ever be the same, Alex Trebek hosted it for so long, he and the show became inextricably intertwined in my opinion.”

Jeopardy!, what an absolutely awesome show and experience.  It has been a big part of our pop culture in more than just a game show,” commented Air Academy Counselor Sean Brotherton, an avid Jeopardy! enthusiast.

As the show is looking for a long term host, Jeopardy! will have different guest hosts starting with former show Champion Ken Jennings, best known for his record of 74 wins in a row.

The search for a permanent host has been narrowed down to a short list consisting of names such as permanently signing Jennings, or replacing him with Anderson Cooper, LeVar Burton, or Dane Cook.

“I think Jeopardy! will stay the same and continue on. I don’t think Ken Jennings will remain the host, I think they will pick somebody younger and more vibrant, like Ryan Seacrest,” added Air Academy employee Joan Nachbar.

Brotherton commented, “Have you ever heard someone answer a question in a form of a question?  What is, all the time, Alex? One of my favorite shows, Saturday Night Live, has had recurring Jeopardy! bits for years.  At an athletic event when referees are taking too long to make a decision, I love it when the Jeopardy! music comes on!”

Trebek made a profound impact on his viewers, and he’s set the stage for the next generation of Jeopardy! fans.

Trebek’s final episode of Jeopardy! as a host will air on the week of January 4th.