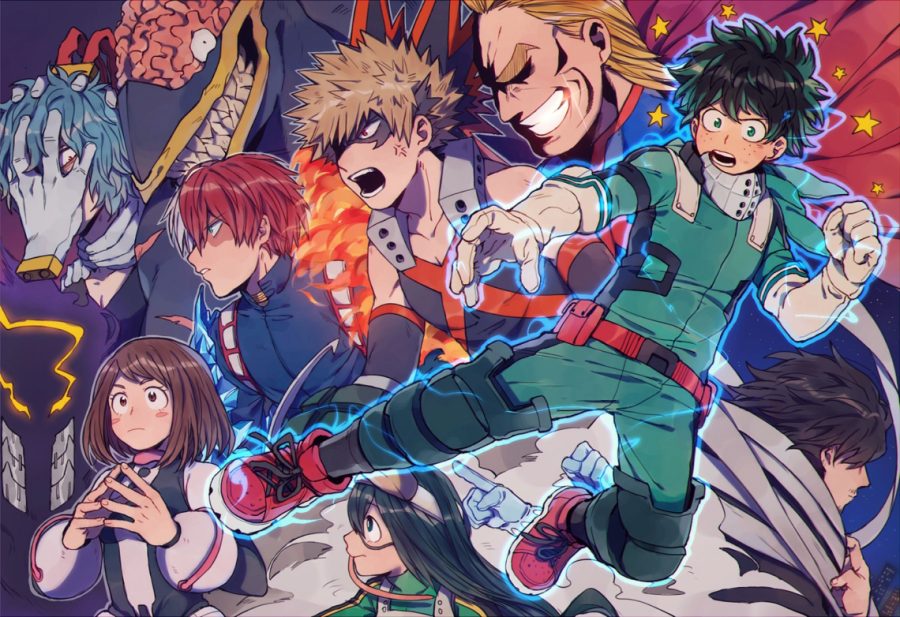 A collage of My Hero Academia characters. Labeled for reuse by mepixels.com

My Hero Academia currently has 4 seasons and a collection of 88 episodes stretching at about 25 minutes each. With season 5 right around the corner, fans are standing at the edge of their seat, especially those who don’t read the manga. Fans are rewatching the first four seasons over and over desperate for the new seasons to come. But, why is everyone so excited?

The My Hero Academia series is a popular anime manga that first debuted in April of 2016. After months without new content, the wait for a new season is finally over and fans can’t be more ecstatic. They have good reason too, despite many people displaying a distaste for My Hero Academia and anime in general; the show is not one to be ignored because of its amazing storyline and strong characters.

The story mainly revolves around the main character Izuku Midoriya (Deku) and his journey to becoming the number one hero.

In a society full of people born with powers or “quirks”, Deku is one of the unlucky 2% of people who are born without any “quirks”.

It starts with Deku being bullied by an old frenemy, Katsuki Bakugou. Then, Deku meets the greatest hero of all time, All Might.

All Might, The current number one hero, stands in front of Deku towering over him and he is freaking out. Soon, Deku realizes that his frenemy Katsuki Bakugou is in danger and rushes in to save him, even though he doesn’t have a “quirk” to fight with. All Might sees Deku save is enemy and his impressed, so he gives Deku his power, Deku now possesses the greatest power.

“I would have to say that [my favorite character] would be Bakugou because he likes to be the best at everything even though he isn’t the best at making friends, “Church continues.

Many people love the show for its intense moments and the scenes of action that are packed into every episode.

“The most climactic part would be when Deku was in the sports festival and he was fighting Shoto Todoroki,” said Willie baker a junior at AAHS.

Anime is a growing phenomenon now and the fanbase surrounding My Hero Academia is proof of that. Anime is no longer just a show genre, it is a culture. The community of My Hero fans is a beautiful community that welcomes anybody interested in joining.

My Hero Academia, although sometimes critiqued is an amazing show, the main plot changes and it has plenty of surprising twists that are sure to knock off those socks. The anime will give you chills at certain parts of the seasons. Its heart moving and sad, a rollercoaster of emotions.

Hopefully My Hero Academia is something you will love and enjoy as much as the many devoted fans out there. Go check it out maybe you might just find something exciting and amazing to watch and if not at least you tried something new.