The View House: Is It All It’s Cracked Up to Be? 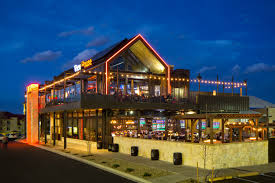 Very recently, a new sight graced the daily commuters along Woodmen Road. A new restaurant was being built, larger than any in the surroundings.

Soon, it came to be known that the restaurant would be a ViewHouse, a popular chain in Denver dedicated to the beautiful sights along the Rockies.

In my younger years, I had always looked to the open, airy design of the ViewHouse along the highway to Denver in awe. I was fascinated by the prospect of eating on a balcony larger than the top floor of my house.

Naturally, the prospect of going to a brand-new restaurant with the very same aesthetic I had grown up wondering about made me quite excited to dine there.

I quickly ticked off the days until a windy Saturday afternoon, where I headed to the ViewHouse to see if it really was what I had cracked it up to be.

The restaurant was extremely airy and cavernous. While waiting for a seat, I found myself wandering to the outside area, in which laid games of over sized Jenga and Connect Four.

Although the restaurant did look interesting, it was very loud. The vaulted metal ceilings and empty space left room for massive echoes to bounce around the space. With a very large crowd taking up the bottom and top floors, it was like a pack of howler monkeys in a cave.

In many other restaurants of a similar size with a similar crowd, the noise would not be as bad.

However, I remained optimistic for the food. The smells were amazing and fragrant, wafting from the kitchen and the tables. Seeing the dishes got me jealous and excited for mine.

I was seated on the balcony and was greeted by a beautiful view casting out to Pike’s Peak itself. The echo was much less skull-rattling on the balcony, and I was quite thankful.

After my drink arrived, I ordered the “Jalepeño Explosion” burger and an appetizer of four mini sliders.

The waiters seemed anxious and overwhelmed. Being only two weeks into business, it was not a surprise that the production of the restaurant was not the well oiled machine that many other sit-downs were. However, it became apparent that the rust on the machine was too heavy to ignore.

When I got the sliders, I was let down. They were only lukewarm, as opposed to the steaming hot that would be preferable. However, with the lack of heat also came an explosion of flavor. The sliders were delicious.

My burger suffered more than the sliders. It was additionally lukewarm, but there were a few more drawbacks. The flavor was lacking and there were very few jalapeños, especially for a “Jalapeño Explosion” burger.

Now don’t get me wrong, the food didn’t ruin the experience. I actually quite enjoyed ViewHouse. The food was flavorful, but it seemed to be rushed onto a plate and then left for too long, allowing it to get cold.

Give the ViewHouse another month, and I bet that it will be run and served very efficiently. For the issues that there were, ViewHouse gets a seven out of ten.

The atmosphere of ViewHouse is unlike any sit-down I have ever been to. It is a great place to relax, laugh, and have a great time with friends. ViewHouse lives up to its name, and it accomplishes its mission, paying homage to the beautiful and special views of our state.