What’s The Skinny With Lunch at AAHS? 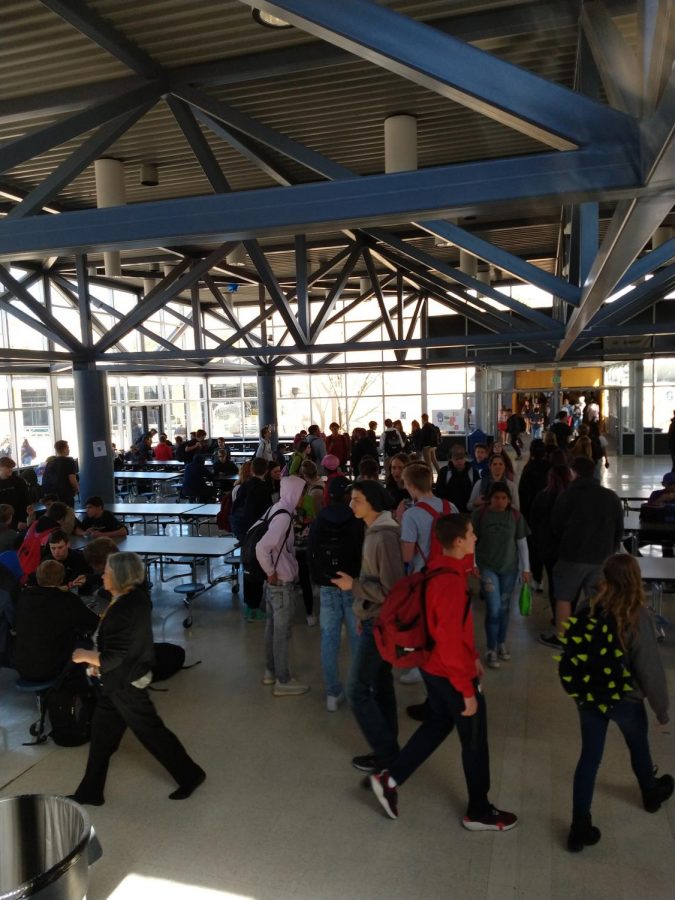 Students rush into the cafeteria at the beginning of the lunch period at AAHS.

Class lets out without the sound of a bell at AAHS, and students flood the halls. The lively buzz of students re-energizing with the beginning of the lunch period rises through the building and many teachers hide in their classrooms to avoid the boisterous bunch. Instead of everyone rushing to the cafeteria, some students rush to their favorite teacher’s classroom, their favorite nook of the building, or out to their car in the parking lot.

That’s right: the majority of students don’t eat in the cafeteria. Easily two-thirds of the students at AAHS find a place other than the cafeteria to eat.

A little less than a third of the student population at AAHS sits in hallways, on benches, and in their favorite nooks or corners of the school.

“Since the cafeteria is usually pretty packed, [my friends and I] have been eaten [at our current location] since freshman year,” said junior Gianna Walla.

Of course, the cafeteria does get ample use, as it is a bustling, lively room during the lunch period.

The massive lunch line for bought lunch at AAHS in the cafeteria stretches from wall to wall.

“If any of [my friend group] had cars, we would eat out in their car where it’s quieter. Until that happens, my homies and I will keep eating in the cafeteria,” said sophomore Ian Redinger.

During nice weather, AAHS is lucky enough to have an enclosed courtyard with tables where many students eat. In the grass in the shade or at the bench tables sit the lively students to gather with friends and eat.

“I love the fresh air, the sunshine, and being outside the classroom or even lunchroom. Being outside and with friends is a great way to break up the day,” said sophomore James Soroka.

Another approximate third of the students go out to the parking lot and eat in other friend’s cars, skateboard or throw around a ball, or rush to get off base or up to Burger King or the commissary to eat out.

I love going out to eat with friends here and there. Going off base is nice because there’s lots to eat on Academy Boulevard and its just always a blast with the boys,” said junior Drew Braden.

“At first, I thought it was saddening that students would go eat in their car and sometimes even alone, but some students just need a place to recharge or even because it’s not crowded and its cleaner. It is very nice that [AAHS] for the many needs of students the way we do,” added Madden.

Whether a student (or group of students) prefers to eat in a quiet corner of lower D building, on a bench in B building, the vivacious cafeteria or out in the privacy of a car, refueling and taking a break so learning can continue is crucial to the school day. No matter the lunch location preference of a student, all are grateful for the unique ability to choose from a multitude of places.