Keeping it Smart With FIRST Robotics 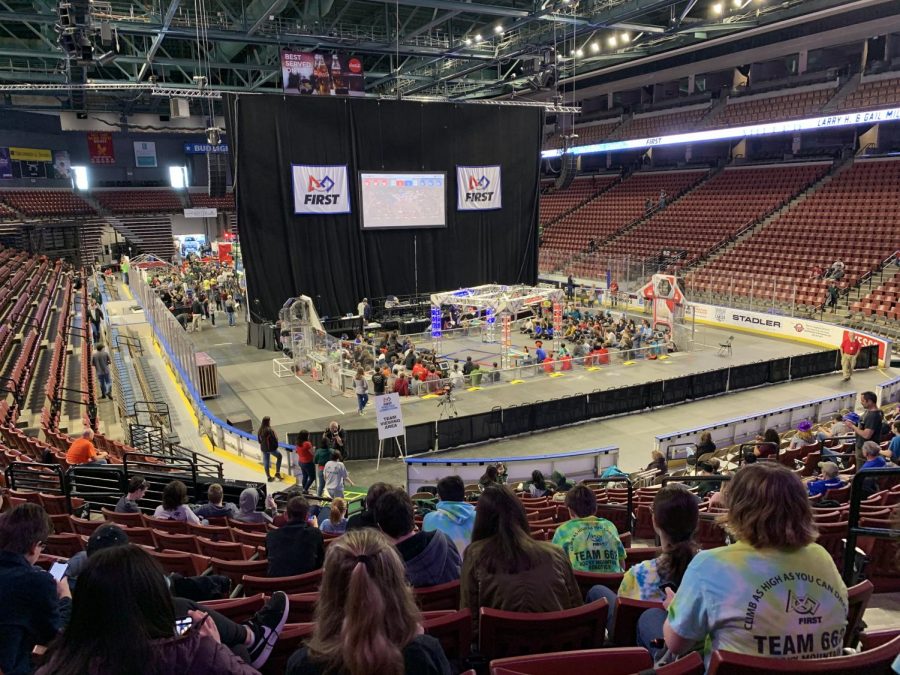 For over two decades, Rocky Mountain Robotics (RMR), more commonly known by their team number, 662, has been gathering the brightest minds from Academy School District 20 to accomplish a common purpose. Every year, students from Air Academy, Aspen Valley, Discovery Canyon Campus, Liberty, and Pine Creek bring together their collective knowledge to assemble robots.

FIRST robotics, standing for, “For Inspiration and Recognition of Science and Technology,” is an organization dedicated to integrating technology and creative thinking into the lives of students. Robotics teams much like RMR meet at stadiums across the world to test their robots against each other in good-hearted competition.

On the week of March 4th, 2020, RMR traveled to Utah to compete in regionals. Students from all of the ASD 20 high schools were excused from classes as they embarked on the grueling twelve hour bus ride.

Upon arrival at the hotel, the students had a calm, social night prior to the events of the next few days. The night passed, and the first day of competition began as the students of RMR team 662 geared up.

The objective of the game is quite complicated. The robots of the respective teams are laid out on a large, rectangular field, and the drivers are separated from their machines by a glass window. On either end of the field is a pair of round, circular goals, one high and one low.

Alliances of three teams, on in red, the other blue, compete to see who can pick up and launch the most balls from the ground into the goals. More of the balls are distributed into the field as the match progresses.

Nearing the end of the match, an alarm will sound and the robots make their way toward the center of the field, in which rests a pavilion made of metal tubing.

The robots, (controlled by the drivers) using whatever mechanical method they prefer, must grab onto the pavilion and raise themselves completely from the ground. Although the climbing is optional, many teams aggressively attempt to score this bonus, as it will give them a high advantage when the final scores of the match are announced.

Once the match is over, the robots are released from the pavilion with the assistance of the teams’ drivers, who are permitted to enter the field to perform maintenance and return their robots to the teams respective areas.

Off to the sidelines, the spectating team members will often be found anxiously waiting for the scores to be announced on the large central screen and for a winner to be proclaimed.

Ties are possible, but rare, and more often than not, three teams will be left downtrodden while the other three celebrates among themselves.

Although robotics may be centered around a basis of competition, it is far more than that to some of the members of team 662.

For example, DCC junior and head of the manipulator department, Elia Muncey, views robotics as an opportunist.

“Before I joined the team, I wasn’t sure of what I wanted to do in life and I felt as though I had been given no experience in engineering,” said Muncey. “Being in robotics has given me more confidence in my technical ability and has allowed me to explore different aspects of the engineering field.”

Muncey’s words tend to ring true with many members in robotics, as some encounter opportunities that they never would have otherwise.

Other members, however, hold robotics in a more social and familial frame. AAHS senior AnnaZafira Conkling, for example, is one of these individuals.

“My favorite thing about robotics is the family you create and the competitive spirit you build,” said Conkling. “not just with your own team, but with everyone you meet [at the competitions.]”

Conkling is one of the teams veteran members, having been on it since her freshman year. She is in concurrent enrollment classes at University of Colorado at Colorado Springs this year.

“To anyone joining robotics, just know you don’t have to build the robot,” Conkling said. “Robotics is a great community to be a part of whether you want to build or not. Join for the leadership, teamwork, and organization experience.”

At the Utah competition, team 662 made a splash, to say the least.

In one of their first matches, RMR’s robot, dubbed “Gary” by some of the students, climbed higher and scored more points than many of the other teams. This put team 662 in a league with some of the world’s most competitive and skilled teams.

In the end, team 662 did not win the competition, but were able to compete in one of the finals matches as a substitute for one of the teams that was unable. This coming week, RMR will be going to Denver for another opportunity to get to the worlds’ competition.

Contrary to what some other teams say, robotics is not about building a winning robot and destroying the competition. For the members of team 662, robotics has always been more than that.

Some members find purpose, some friends, and others find the family they have been missing for most of their life.

Next week, 662 is going to Denver for their second opportunity to go to the Detroit worlds competition. So if you know any robotics members, wish them the best of luck. However, RMR has always been special, and they may not even need the luck.