Take Away the Distractions of Cellphones in Classes 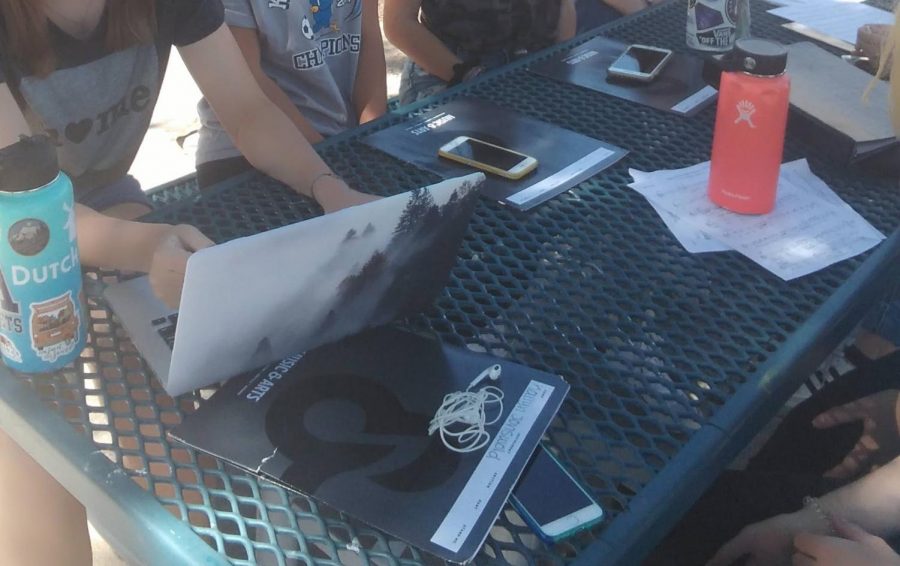 Students leave their phones on the table while working on classwork outside.

Teachers loathe them. Students love them. Parents buy them. In general, people overuse them. What are they?

Many students use their phones for a wide variety of things, but in classes, they should only be used for one thing: emergencies.

When we’re playing games or texting through an entire class period, we miss important lessons, notes and even sometimes forget about turning in classwork or homework.

When a teacher has to stop a lesson plan or constantly ask one student to put their phone away, it becomes a distraction to everyone around them.

“I’m more of an ‘it’s not my responsibility’ kind of person. It only really bothers me if they’re distracting the whole class in the process,” said senior Dante McDonald.

Phones distract students during important lessons, quizzes and sometimes unit exams; they cause issues with grades and can even force teachers to confiscate them.

“It always bothers me when others are on their phones because it’s super disrespectful to the teachers. The students aren’t making an effort to learn something,” said junior Anja Black.

“Some people spend too much time on their phones to the point that it distracts their learning, but I also know for some teenagers, if you took away their phone, they still wouldn’t focus because they’d be thinking about everything they’re missing without their phone,” said McDonald.

While there are teachers who don’t allow phones to be used, there are others that don’t mind them as long as they don’t become a distraction.

These teachers tend to hold less of their students’ attention. During important notes or lessons, students tend to disengage and become involved with their phones.

Classes with rules on phones tend to have a higher success rate of keeping their students’ attention and being able to go into detail on the notes and questions.

“It depends on the teacher. Some teachers have the students’ respect and they don’t need to be strict. Being more strict can cause some tensions between the students and teacher, but if it is getting out of hand [strictness is] needed,” said Chatterly.

The students who see teachers this way tend to become increasingly less interactive in their classes; they lose interest and their grades start to slip.

This can cause problems towards graduating on time or decrease involvement with relationships. It can also cause missing assignment emails to be sent out to parents who will inevitably make their children turn in those missing assignments or ground them.

Phones distract students from the importance of school and can hinder their learning, eligibility and understanding of a subject and possibly cause late graduation if a failing grade is not made up.

However, there is only one time in which phones should be appropriate to use during a class period. Emergencies are under-emphasized in the classroom but should be understood more as the only acceptable time to have a cell phone out in class.

“I think to an extent, teenagers should be responsible for making their own decisions. I think that having one is good because you never know what could happen and you may have to contact your parents or friends, but we should know that if we’re in the middle of a class and it’s work time, put the phone away,” said McDonald.

Emergencies include a self-harm threat, seizures, broken bones, or something that exists with a drastic measure.

Students should be taught through middle school that phones are not to be used during classes unless an actual emergency takes place inside the classroom.

At any point in the day, anything can happen: someone could break a bone on a misplaced chair or a person that battles epilepsy could have a triggered seizure; it’s better to be prepared to use your phone for an emergency over a game or social media update.

Phones should only be used for emergencies during classes; falling behind just because of a distraction shouldn’t be something that students have the option to go through.

As much as students love them, cellphones are only distractions to the learning environment.