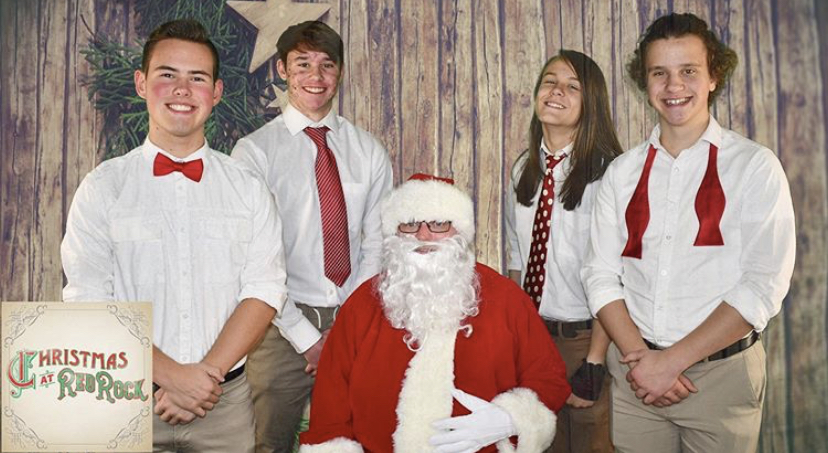 Many books and movies depict high school students joining bands, but how often do students do that in reality? For a group of five students at Air Academy, this dream of jamming with each other has become a reality. The band, Mexican Soda, has a story that even seems like it could be out of a movie.

The idea all started when sophomore and bass guitarist Ben Hellem, sophomore and drummer Jackson Berry and freshman and guitar player Cohen Kyle started to play during Jazz Band. None of them were really friends before, and they barely knew each other, but after playing during class, they decided that they might want to start a band together.

The drumhead with Mexican Soda’s logo shows its fiery color.

After they had organized the band, though, they struggled to come up with a name for the band until Berry mentioned he had to bring in soda for his “fiesta” in Spanish class. Then they knew what they should do.

“I brought in 5 bottles of a soda, called Jarritos, with some cups, and I realized that it was a lot of soda, so I decided to open one of the bottles when I was with the band. So, when we were drinking the Jarritos. We decided, hey, we should call ourselves Mexican Soda. After that we called our first song Mandarin because that was the flavor of the Jarrito that we were drinking,” said Berry.

After being together as a band for only three and a half months, they are working on their first album, called House Fire. They have already made the cover art for it, depicting the band playing in the garage of a burning house. They are set to have between eight and ten songs and have planned to start recording it in March.

“The album should come out sometime soon. Most of the songs that we play are rock and alternative, but we end up playing a lot of different genres,” said Hellem.

Though they are starting to see some success, seeing that they are about to record their first album, Young, Hellem and Cosby had each been in other bands before that did not see similar success. They all seemed to dissolve or go nowhere, and they definitely didn’t create an album together.

“I had been in a band before, but this is definitely the most successful one that I have been in,” said Cosby.

A part of the success can be attributed to how often they practice. They play every other day at lunch, then they all meet on Friday nights to continue practicing and prepping for their album.

They have even started to see opportunities to play for people besides family and friends. They played on February 12 in the Air Academy auditorium for Eighth Grade Night for prospective students. The show turned out to be a big success, and many people were able to see them play. They plan to also get gigs for other events as well.

For a group of high school students who weren’t even friends before finding their mutual interest in music, creating this band and their first album has been a huge accomplishment and potentially a sign of success to come.