Many people feel suffocated by the weight of modern-day issues. Photo labeled for reuse by Unsplash.com

As college tuition rates inflate, environmental issues explode and political tensions rise, many teens begin to feel the pressure of living in a world engulfed in chaos. Amid conflicts that range from personal to global, we can’t help but wonder:

What am I doing with my life? Why am I here? What’s the point of all this?

Before addressing those questions, however, we have to look into why many youth ask them in the first place.

First of all, high school brings concerns about the future, primarily college. For many students, the pressure to get into college can be immense, but the extreme cost of higher education is another obstacle to students’ peace of mind. 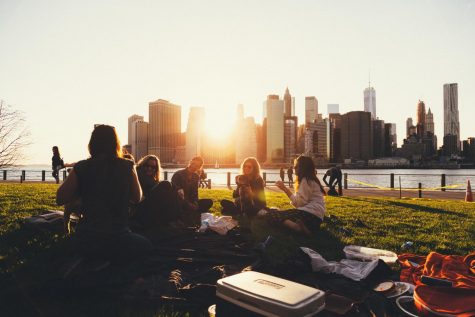 Many students face concerns about the cost of going to college despite society’s emphasis on higher education. Photo labeled for reuse by Ben Duchac on Unsplash.com.

There’s a checklist we all have to run through to meet society’s expectations (pass school with good grades, head to college, get a degree, get a high-paying job, all the while figuring out who we are and who we want to be in the future), and despite their good intentions, our parents and supervisors have impressed onto us that we cannot and will not succeed unless we go to college (even if that’s not necessarily true).

“It’s a lot of pressure to pick a college and decide what you’re going to do in life right now,” said senior Rebekah McIntosh.

Even if students paid back that debt with 1% of their total debt amount per month (in this case, $1,326.80) with an average lowest interest rate of 4.53% according to Nerd Wallet, it would take 10.6 years to pay the debt off. Students would also pay $34,345 in interest. However, the average student loan payment per month is just $346. 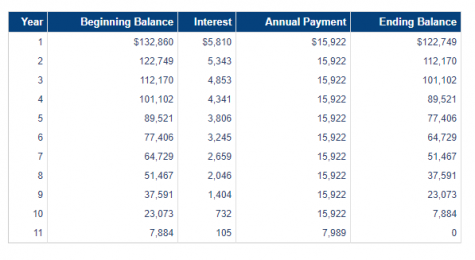 Even with a lower average interest rate on an average student loan with a monthly payment of over $1000, an entire decade of payments will be necessary to pay off the debt. Calculations done on CalcXML.

“I gave up on a four-year college after I found out how much it was,” said junior Trinity Gahimer. “I even switched my major.”

Students are either dropping their dream schools or preparing for a lifetime of debt.

This is a huge increase from the costs our parents and grandparents paid in college; CNBC records that in 1988, the average year’s tuition was just over $3,000, adjusted for inflation. That jump in costs leads to an exponential jump in stress; many students are nervous about their financial well-being in the future.

And, considering the payoff it provides, college is incredibly expensive. Most college graduates make an average of $50,000 post-graduation, which is less than half of the salary modern graduates report expecting to make, according to The Balance.

Take that salary and consider the logistics of having a child (CBS notes that it’ll cost around $14,000 per year!), paying off loans, credit card debts and buying a car or a house. Is that enough money?

On top of those college problems, many global issues are coming to a head around students. They hum like a swarm of wasps in the background of our collective psyche, an invisible weight on students across Air Academy and the country as a whole.

Climate change has been on the minds of Generation Z for a long time. Worldwide temperature changes have begun to decrease species diversity at an alarming rate, and according to the National Oceanic and Atmospheric Administration, “The ocean absorbs about 30% of the carbon dioxide that is released into the atmosphere from the burning of fossil fuels.” This absorption increases the ocean’s acidity and affects the migration patterns, breeding seasons, and populations of ocean-dependent wildlife.

Pollution has gone unregulated for many years, and many students today will have to face the burden of trying to slow down, prevent, and eventually reverse the damage that has been done to the environment. 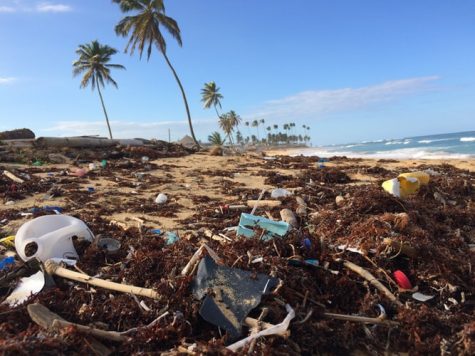 Many shorelines, like this Dominican Republic beach, are covered in wildlife-killing trash. Photo labeled for reuse by Dustan Woodhouse on Unsplash.com

To drive home exactly how alarming the extent of the carnage has become, HuffPost notes that “150-200 species of plant, insect, bird and mammal become extinct every 24 hours. This is nearly 1,000 times the “natural” or “background” rate.”

Of course, Australia’s wildfire outbreak has put thousands of more species at risk as well, and the Wuhan coronavirus has had outbreaks outside of China, reaching to the US and other western countries.

Political tensions, particularly those concerning the US and Iran, are continuing to boil. Donald Trump’s impeachment hearings have gone to the Senate (which will decide whether the issues for which he was impeached are worthy of having him removed from office), and a world of corrupt politicians’ crimes are coming to light.

There’s a growing awareness toward the horrors many people experience in their daily lives; even in America, the richest country in the world, the top 10% make more money than the entire 90% combined–and globally, according to Business Insider, the average American makes more in one month (over $2000) than a person in India earns in an entire year. The wealth gap nationally and internationally is staggering.

Sometimes it feels like we’re drowning under wave after wave of knowledge. It’s too much. So where does that put us, a generation of American teens with a crippling awareness of our own existences in comparison to those of others? How have we reacted? What are we going to do?

Mental illness, especially depression, has increased exponentially among youth. Psychiatry.org notes that “Depression is a common and serious medical illness that negatively affects how you feel, the way you think and how you act…[It] causes feelings of sadness and/or a loss of interest in activities once enjoyed.” Depression is a mood disorder, meaning that it affects chemicals in one’s brain, most often reducing the effectiveness or amounts of dopamine, the “happy chemical.” 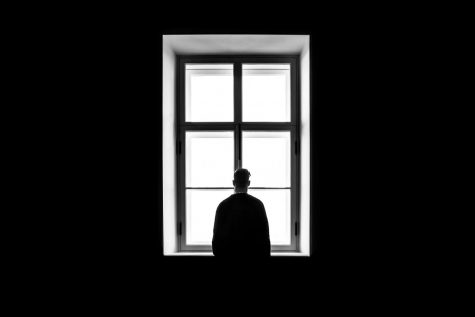 Depression, though commonly mistaken with normal sadness, can cause feelings of emptiness and lethargy. Photo labeled for reuse by Sasha Freemind on Unsplash.com.

Untreated depression is also the number one cause of suicide. Colorado’s teen suicide rate is nearly double the average for the nation, according to CPR.org.

“For [American] youth, major depression increased 52 percent from 2005 to 2017,” according to US News, but only 20% of depressed youth receive mental health treatment.

This trend has, of course, been linked to phone use, especially the use of social media, though other factors contribute.

Anxiety, paranoia, and feelings of helplessness or emptiness are all common side-effects of swiping through digital platforms that flood our brains with information about how much better our friends and classmates are doing.

The internet is a gateway into intimate knowledge about all the issues we, as minors, are largely helpless to solve, and yet we’re going to be responsible for their solutions very, very soon.

Joking about mental illness can contribute to the problem as well, as self-deprecating humor is an all-consuming trend for many young people that can trivialize the issues.

Stress levels have increased dramatically throughout America, and stress levels are notably highest among teens and young adults. Generation Z “scored high on stress associated with their fears of school shootings as well as the influence of social media” along with other stressors concerning future financial, social and economic problems, according to Psychology Today. However, they have fewer coping mechanisms than previous generations.

There’s also the loneliness crisis among teens, the increase in national drug abuse, and more.

All of these factors have contributed to intense problems for students–depressive episodes, panic attacks, and existential crises.

“[For] young adults and teens, I think it is part of normal psychology to question meaning and purpose. But with that being said, I do not think these questions are easy to answer for many people and the stress of it should not be underestimated,” Robson said.

But it’s not all doom and gloom.

Generation Z is more entrepreneurial, hardworking, career- and salary-focused than the previous generation, says CMO. We have a greater understanding of the internet and our impact, both digital and physical, on the world as a whole.

Business Insider writes that we are the most diverse and inclusive generation in history; we’re embracing LGBT+ rights, especially trans rights, more openly than Millennials, Generation X or Baby Boomers.

“[Air Academy] having a GSA…really helps our LGBTQIA students, as this is the group of students with the highest suicide rates among all students,” said Robson.

Collectively, we’re working toward making the planet a better place; Gen Z champions of environmental issues, like Greta Thunberg, are causing a sense of urgency among the American population concerning the world that continues to spur innovation toward a cleaner planet.

We understand the depths of mental illness and are pioneering solutions to combat it because we have a more intimate knowledge of what depression, anxiety, and other disorders feel like.

Despite the mid-teens crisis, we’re working for a solution. We’re aware of hundreds of pressing issues today (sometimes too aware), and our awareness leads to work toward solutions.

And soon enough we will be solving those problems. For now, we’ll work steadily toward our goals one college degree, donation and Instagram post at a time.

“Look at the big picture and look at the end goal, but also live in the moment, too. Find a balance,” said McIntosh.