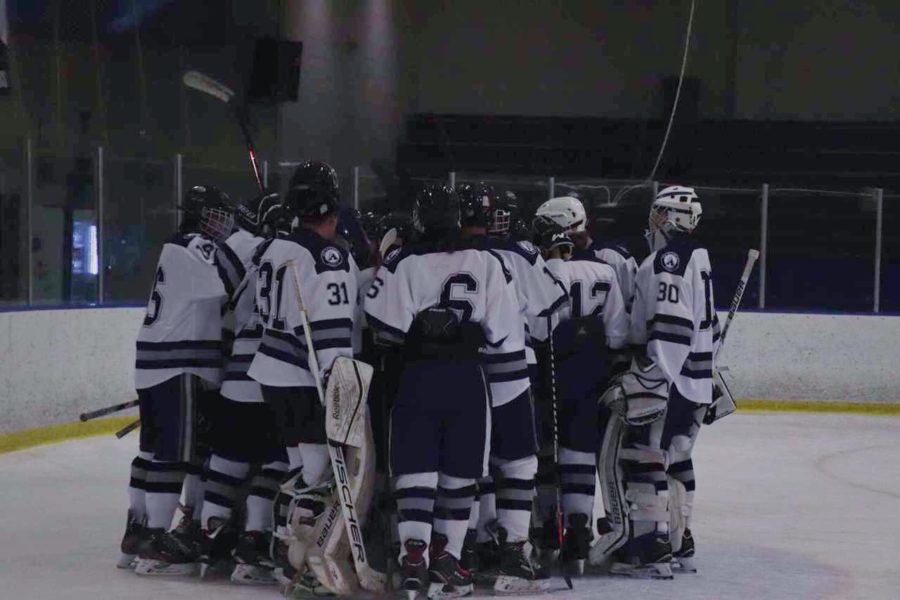 Winter sports have arrived at Air Academy once again, bringing new athletes, continuing traditions, new equipment, and departing seniors’ last chance to perform. One of these winter sports is hockey.

Coached by Andrew Marshall and Cody Patterson, the Kadet Hockey team is looking forward to yet another winning season heading into 2020. Their rigorous schedule of practices, scrimmages, and games span from late November all the way to mid February, challenging players across the team.

Hockey is often viewed as one of the most brutal and punishing sports offered here at Air Academy (and in the general world of sports), with players skating across the small ice court at speeds of up to 30 MPH, only to be checked into the bordering wall before even catching a glimpse of the elusive puck.

The players wear full pads and full face helmets in an attempt to prevent injury, however, players still risk their health every time they step onto the ice. These factors, along with many more, account for a one-of-a-kind fan experience that can only be rivaled by the echoes of the K-Dome on a fall Friday night.

The Kadet Hockey team is working tirelessly to bring a championship back to Air Academy High School, and plan to do so with a new freshman class looking to contribute to scoring goals.

Returning sophomore Jacob Jones said about the upcoming season, “The team is definitely competitive this season, we did really well in the Jamboree compared to last season and practices are looking a lot better.”

The Jamboree details the night over break where the team played 3 games against all other District 20 schools in a single night.

Although returning sophomores and upperclassmen add a certain depth and veteran presence to the roster, it’s new freshman that can easily account for the difference in a competitive team making a run at the State Championship.

“I think that more people should try out because we haven’t had a lot of people trying out for hockey recently, but this year we’ve [definitely] seen a lot of freshmen come out to play,” said sophomore Ben Roy.

“The team’s changed a lot, [there are] lots of new faces, new team captains, and new jerseys,” said Jones.

Unfortunately, Air Academy doesn’t have its own Hockey arena, meaning that the Kadets home games are played in the Air Force Academy’s Cadet Ice Arena, adding to the atmosphere of Kadet Hockey.

Students and the general public are of course encouraged to attend Cadet and Kadet Hockey games, and will not be disappointed by the awe-inspiring performance that is continually displayed by these athletes.

The atmosphere of winter sports at Air Academy is consistently saturated by more popular sports such as wrestling or basketball, meaning that sports such as hockey that are currently on the “back-burner” are encouraging more students to come out and experience Kadet Hockey first-hand.

The Kadets’ next game is against a tough Coronado squad in the Sertich Ice Arena on December 6 at 3:00 PM.