The Science Santa Claus: The Plausibility of the Jolly Man 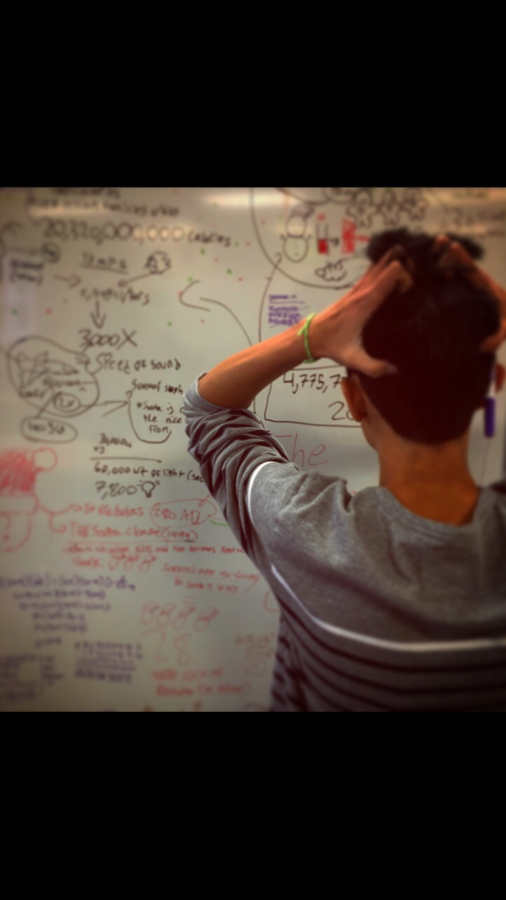 Riley Cosby looks at his masterpiece; using real life science. he mapped out Santa's journey and the science involved to deliver presents in a very long, very tedious math problem.

He sees you when your sleeping.

He knows if you’re awake.

He knows if you’ve been bad or good, so be good for goodness’s sake!

Saying this without context, would probably sound like a horror story, but those are the lyrics to one of the most popular Christmas characters of all time: “Santa Claus is Coming to Town.”

The story of Santa Claus has been told for generations, but how exactly can he make all of those Christmas dreams come true?

First things first, we need to find out exactly how many presents he delivers on Christmas eve.

Let’s suppose the number of children who believe in Santa are between the ages of 6-12. That would mean there would be about one billion children receiving presents. If each child receives 3 presents from Santa, some basic multiplication leads to a large estimate of 3 billion presents that need to be delivered. The average weight of one present is around 2 pounds, meaning the total weight averages out at 500,000 tons.

That’s ten times the weight of the Titanic.

With all of those presents on Santa’s sleigh, Santa needs to fly quickly to give every kid their presents, and he only has twelve hours to travel around the world.

Let’s see what he has to do:

Sophomore Joey Heiny said, “Around the time of World War Two, an Air Force officer named John Stapp learned personally that a human can withstand around 46.2 Gs of force The experiment only went on a few seconds, but for an instant, his body had weighed over 7,700 pounds. He died right after the test.”

If Santa were to go twenty times the speed of light, he would have to withstand 97,000 Gs of force.

That means Santa is no ordinary human along with being immortal.

1 cookie equals 40 calories
Each family places 4 cookies on a plate for Santa, which equals 160 calories.
Multiply that by the 127 million families that have kids that believe in Santa and place out cookies
The total is 20,320,000,000 calories (to put that in perspective, an entire stock of Safeway only consists of 800,000 calories).

Science teacher Cyndi Hatcher said, “When we eat too much, we can cause our stomachs to expand like plastic, because our stomachs are very stretchy, but we can actually expand it out and leave it expanded, so Santa’s stomach would be permanently expanded to the size of that food.”

Although Santa does have to run around the world, so wouldn’t that be burning calories?

“He’s just eating cookies which is simply carbohydrates: quick sugar. So he’d have a lot of energy at the beginning but then he would die off very quickly,” said Hatcher.

But Santa isn’t the only person working hard on Christmas Eve–he also has his trusty reindeer.

The Canadian reindeer or caribou cannot fly, but they can travel up to 48 miles per hour, which is fast…but not fast enough for Santa’s duties. To meet Santa’s schedule, the speed for his sleigh and the reindeer would be 3,000 times the speed of sound.

“All male reindeer lose their antlers after the mating season which ends early in November. So, for them to still have their antlers in December, and beginning of January, they would have to be female, and a female reindeer body can withstand more force than the average male,” said Heiny, who theorizes that all of Santa’s reindeer are females.

Rudolph the Red-Nosed Reindeer is the most famous, of course. His (or her) nose presumably shines a bright path for Santa to see. But conditions at high altitudes are murky and dark, especially at night.

To compare Rudolph’s nose we can use airplane landing lights. Airplanes can see at night at a height of 200ft with a voltage of 600 watts of energy.

If Santa’s sleigh is soaring at 30,000 feet, though, Rudolph’s nose would have to be generating 60,000 watts of light, which equals the output of 7,800 of the brightest light bulbs in the world.

Moving on, Santa’s age has been sorted into two separate theories:

One claims that Santa is the only Santa that means he has been playing the role ever since 280 AD.

The second theory relates to the movie “Santa Clause” that released in 1944. In the movie, Tim Allan accidentally kills Santa Claus and therefore becomes the new Santa Claus.

So, if someone takes Santa’s mantle for twenty years before retiring, then there would be 28 multiple Santa’s from 280 AD to 2019. Therefore, if Santa Claus was (or is) a real person. He would have to have a strong physical anatomy, to withstand all the strain and burden it takes being Santa. For twenty years!

Santa and his reindeer must be immortal super-creatures…or even aliens!

That aside, the existence of Santa can and will always be debated, but looking into and questioning stories can always be exciting and interesting.

The most important takeaway is that Santa will always be an entity of joy that gets his job done amazingly year after year.