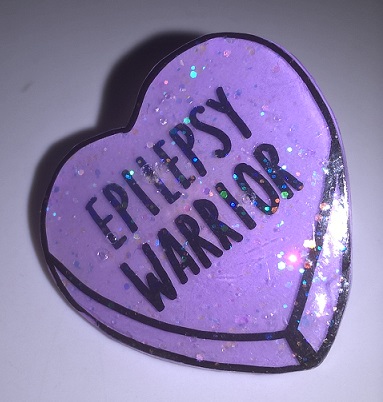 The Epilepsy Warrior Brooch was showcased on Purple Day, Nov. 2, to give awareness for epilepsy.

In their lifetime, 1 in 10 people will have a seizure, and 1 in 26 people will develop epilepsy, according to Healthline.

According to the Centers for Disease Control and Prevention (CDC), epilepsy is the fourth most common neurological disease and affects people of all ages.

Epilepsy is a neurological disorder marked by sudden recurrent episodes of sensory disturbance, loss of consciousness, or convulsions associated with abnormal electrical activity in the brain.

The epilepsy awareness walk also takes place during the end of April every year to help raise money towards research and aid for those who live and struggle with epilepsy.

If anyone in a family is affected by epilepsy, members can sign their child up to be apart of the Kids’ Crew with the Epilepsy Foundation to help children and families spread awareness for those with epilepsy.

There are many ways to help spread awareness for epilepsy. There are resources, articles, and foundations to help educate yourself and others on epilepsy and what can be done to help those who struggle with it their entire lives.

While some epileptic people can live in a carefree environment and be around specific types of objects, others have to be more cautious. Flashing lights, spinning illusions, big flashes, even video games can all be triggers to epileptic episodes for some.

“There are a few things we can do to help prevent epileptic episodes. Some people take medication for their epilepsy, so making sure the person has taken their medication for the day is one way to help. Another way to help is not to turn off and on the lights to get people’s attention; that can cause an epileptic episode. Some people’s epileptic episodes are triggered by being too hot, [so] making sure that a particular person maintains a comfortable body temperature that’s not too hot or too cold [can help],” said Services to Exceptional Students (SES) worker Kat Boisvert.

“I would say that people that are not trained should always remain calm and supportive of the person having a seizure, staying with them to reassure them and their safety and to ask for help,” said SES worker Risa Arseneault.

Even though epilepsy can be treated with medication, it is a lifelong battle for many. It can result from a genetic disorder or an acquired brain injury, such as brain trauma or a stroke. There are many cases of epilepsy where 6 out of 10 people have unknown causes. While there are 3.4 million people in the United States with active epilepsy, another 65 million people around the world also struggle with this neurological disease; according to the Epilepsy Society.

However, after the age of 55, the rate of new cases of epilepsy starts to increase as people develop brain tumors, strokes, or Alzheimer’s Disease; all of which can lead to epilepsy, said the Epilepsy Foundation.

Not everyone is going to have an epileptic episode for the same amount of time either. Everyone’s stage of epilepsy and their epileptic episodes are varied. Many can last 5 seconds, others can go for longer than 10 minutes. Depending on how long the episode lasts, it may just be in the best interest to call 911.

“An epileptic episode occurrence varies from person to person, it really depends on the person and their body. An epileptic episode affects everyone differently, someone may only have one every once in a while, while someone else may have many episodes throughout the day,” said Boisvert.

Conquering every day, epileptic men and women continue their daily lives as normally as possible. While it could be difficult to drive due to blinkers, flashing lights, and fast movements, it is possible to drive with epilepsy.

Colorado, for example, doesn’t have a set seizure-free period. But the Colorado Department of Revenue: Division of Motor Vehicles (DMV), does require that each driver license applicant disclose a physical disability that would cause a lapse of consciousness. They are also allowed to seek medical opinions from physicians and optometrists to determine whether a person is mentally and physically safe to drive.

Although awareness day was on Nov. 2, 2019, as a community everyone can make every day an awareness day to help those living with epilepsy.