Halloween At AAHS Through The Years 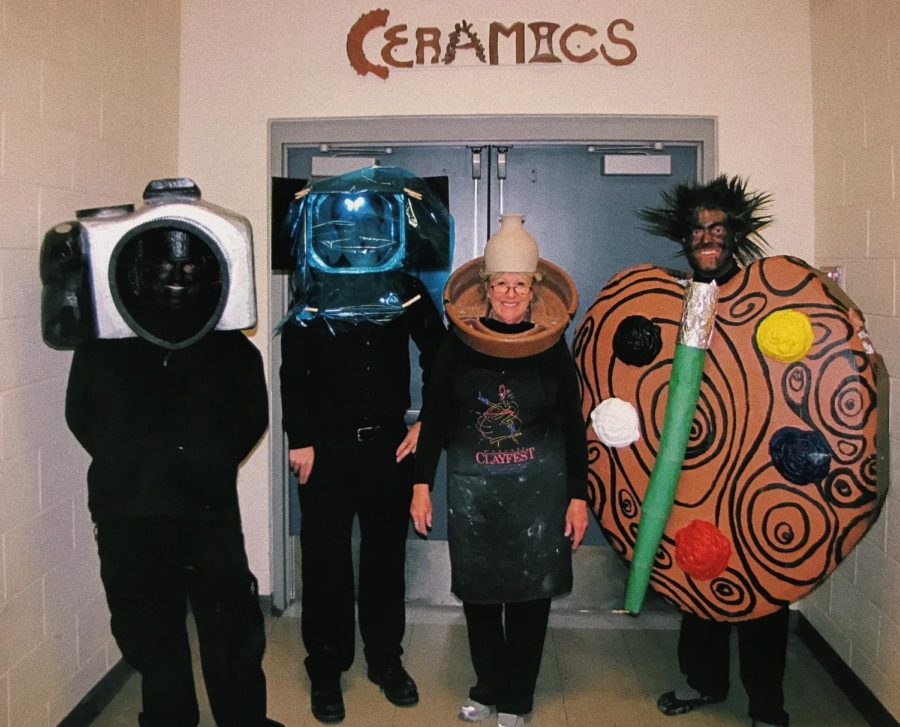 "You Are What You Teach" costumes from the Art department

October is finally upon us, which means chilly fall weather, the end of the first quarter and Halloween are approaching! Although Halloween may be a favorite holiday for many, plenty of teenagers in high school are starting to lose their spooky spirit.

With trick or treating becoming “childish” and parties being “too wild,” many students are skipping out on celebrating Halloween this year.

Most students believe that Halloween has become one of the less popular holidays for those in high school, with decreasing participation from everyone, especially upperclassmen.

“In elementary school, Halloween is a really big deal, but as you grow up it becomes like a childish holiday,” remarked junior Maizie Daye.

Halloween has not always been the same at AAHS. The school was established in 1956 and has gone through 61 years of Halloween celebrations; luckily, some of the teachers at AAHS today were there to see how it was celebrated when they were high schoolers.

Engineering teacher Jason Buhler attended AAHS from 1984-1988. He described Halloween during his student days as “standard” with minimal participation from staff and students.

As a child, Buhler set up haunted yards and enjoyed them with his friends. Now, as a teacher, “Halloween has become a huge deal for the engineering and art department.”

The two departments have worked extremely hard to make some amazing costumes, including members of the rock band “KISS,” mutant m&ms, zombie Pixar characters and more.

“The current ceramics teacher, Johnny O, and teachers who no longer work here were doing this way before I worked here,” added Buhler.

The other departments at AAHS are no competition for the art and engineering departments’ costumes, but they still enjoy dressing up in themes of their own.

English teacher Cyndy Morgan attended AAHS 1988-1992. Similar to Buhler, Morgan does not remember a special Halloween as a student.

“I honestly don’t remember, I probably dressed up…nothing about those times stands out,” said Morgan.

Now a teacher, Morgan takes part in the english departments’ participation in Halloween costumes; in fact, one year they dressed as idioms (ex. “kick the bucket,” “raining cats and dogs”). She remarked that this generation is a lot more invested in the holiday than when she was younger and hopes that this year, the spirit will live on.

It is important to take a moment and consider the changes that have occurred through the years at AAHS. Although many students do not consider Halloween enticing or exciting, the spooky school spirit has grown over the years; the teachers who attended the school can confirm that.

Halloween is more than just trick or treating and parties; it is about being whoever you want for a day and enjoying the company of others. So dress up in a cheap costume, grab some candy, put on a (not-so-scary) movie and have a spooky Halloween!