The Barrier to Gun Control: Political Activism (or Lack Thereof) 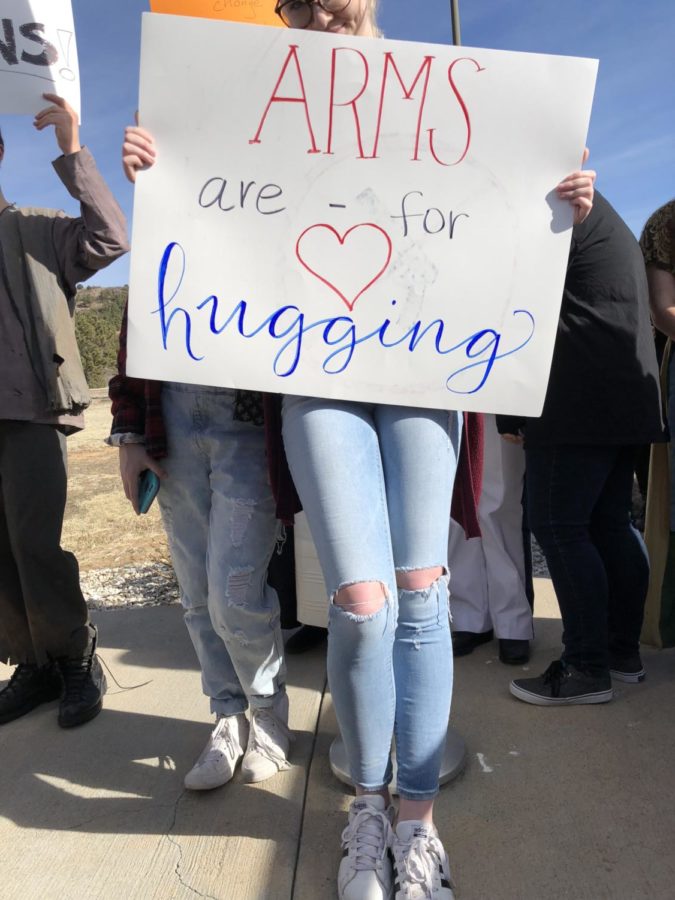 On February 14th of this year, the United States was ravaged by yet another school shooting; it was the first school shooting to draw major attention this year, yet it was the 18th school shooting since the start of the new calendar year. But on the day after the one month anniversary of the tragic event at Stoneman Douglas High School, the number has only continued to rise and nothing has changed.

The status quo is abhorrent:

The Los Angeles Times updated a graphic on the day of the Parkland shooting, which shows the number of school shootings since Sandy Hook; the number topped 290. Since Sandy Hook, back in December of 2012, a gun has been fired on a school campus roughly once a week.

Yet, we can continue to broaden the scale. Go back a few years to 2013, and the CDC reports that the number of gun-related deaths in the United States exceeded 33,6oo and over 73,500 gun-related injuries. While this may not sound like a major problem for a nation of over 320 million people, it is an abnormally high amount of civilian deaths due to gun violence. To put that in perspective, the BBC compares that, in 2012 (one of the most recent years with statistics available for comparison), the number of gun deaths per capita in the United States was 30 times higher than that of the United Kingdom.

Continue to expand the scale. The number of US military forces that died in combat as a result of the conflict in the Iraq War has been tallied at about 4,497 casualties. Compared to the gun death statistics in the US from 2013, the entirety of Operation Iraqi Freedom would make up only 13% of the total gun deaths. An average year in the United States is more dangerous for American lives than an 8 year long war overseas. Similarly, it would take only about two years of American gun deaths to exceed the total number of United States armed forces casualties in the entirety of the Vietnam War, about 58,000 deaths. 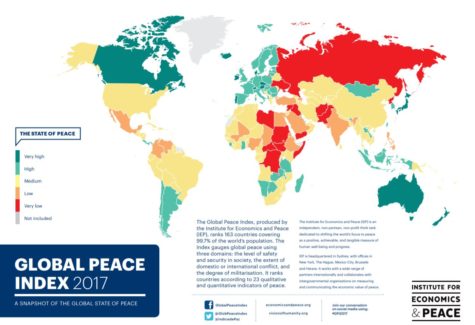 There is a good reason as to why the Institute for Economics and Peace rated the United States as “medium” in 2017 on the Global Peace Index (which rates countries on a scale of very high, high, medium, low, and very low based on several factors, including domestic security and safety). To put the graph in perspective, countries like Canada and Australia rank very high, and countries like Syria, Iraq, and the Democratic Republic of the Congo rank as very low.

The United States ranks in the middle of the pack and, despite being one of the most developed countries on the planet, is more comparable in peace to that of countries like Nigeria, Iran, and Myanmar, all countries that are also ranked as medium. Yet, Niger is surrounded by war-torn West African nations and is currently burdened with the conflict caused by Boko Haram, Iran is locked in regional conflict with neighbors Syria and ISIS, and the government of Myanmar is currently causing a mass genocide of the Rohingya population within its borders. Sadly, the gun violence in the United States caused by its own citizens is comparable to that of war-torn nations and terrorism.

Unsurprisingly, the status quo of gun culture within the United States has caused mass opinion to weigh in favor of stricter gun control policies. In fact, several national polls place public support of stricter gun control between 60 and 70 percent, an easy majority. Furthermore, a Gallup poll in October of 2017 shows that 96% of Americans support background checks on all gun sales, 75% support a 30-day wait period, and 70% support all privately-owned guns to be registered with the police. But despite the support, the last significant gun control law passed in the US was in 2007, which required federal agencies to record lists of individuals that should not have access to guns, including those with mental illness and those convicted of misdemeanor crimes. It has been over a decade since then and hundreds of mass shootings have taken place, yet nothing significant has changed.

While media, politicians, and the public are quick to point their fingers at organizations like the NRA and Congress as the cause of political gridlock on gun related legislation, the true barrier obstructing increased gun control laws is the American public. Oddly enough, the same 60 to 70% of those supporting stricter gun control laws are being overshadowed by the minority who support the status quo or push for even looser legislation. But why is this? Fundamentally, the government is a representation of how the public votes; the individuals the public supports are elected into office and are obliged to represent their constituents. If this were true, then roughly 60 to 70% of legislators in Congress would support stricter gun control. Given the current state of Congress, this obviously is not true, and the reason for this lies within the American people and how they vote.

Opine with votes to create change:

If the public wants stricter gun control legislation, it is their responsibility to vote and elect those into office who they believe will make change for the issues they are passionate about. Whether an individual supports or rejects stricter gun control, it is their duty as a responsible citizen to exercise their basic right to vote. As a part of our societal social contract with the government, the Constitution, we have a duty to elect officials into the government, and they have a duty to represent us. A mutual agreement between the government and the people has been established, and the government is, for the most part, upholding their end of the deal. However, the public routinely fails to represent themselves at the polls. 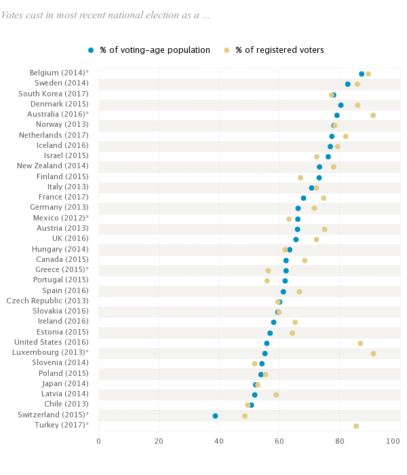 In the 2016 election, Pew Research Center reports that voter turnout for the voting age population (VAP) only registered at about 55.7%, and voter eligible population (VEP) was slightly better at 59.3%. This level of turnout trails most developed countries across the world. Earlier polls by Pew Research Center a few years earlier project voter turnout for midterm elections to be even lower, with turnout standing at roughly 40%. However, midterms are just as important because it gives the American people a chance to change out their representatives within Congress, the same people who are responsible for creating and passing the gun control laws that the public has been so desperately calling for.

Yet, the people obviously do not care enough to elect officials to office to pass stricter gun control laws. If they truly did, then we would have passed gun legislation after Sandy Hook, when people hoped that a massacre of elementary school children would be the last line for political gridlock over gun laws. Yet, the public still failed to represent themselves despite the passion and frustration regarding the prevalence of mass shootings; no laws have been passed because a minority of legislators who support restrictions or who reject NRA funding have been elected into office.

The only thing that will change the pattern of gun violence in the United States is if the public becomes passionate enough to take a stand for their views and swap out congressmen this November in midterms. So far, students have shown the most political activism regarding the issue of gun control, especially since Stoneman Douglas in Parkland, Florida. However, if we continue to only have 40% turnout again this year, nothing will change.

Ultimately, the burden of change lies on the American people and how much they care about gun violence. Regardless of what people believe, it is their duty to vote. Thoughts and prayers do not create change within the government, voting and elections do. Consider this a call to action; people have had #Enough, and it’s about time they represent themselves. Despite the politically charged debates, the millions of dollars pumped into research, the protests in the streets, and the deaths every day, there is a simple solution to a complex issue that the American people themselves, you and I, can take part in: vote.