Paragliding Across the Unknown 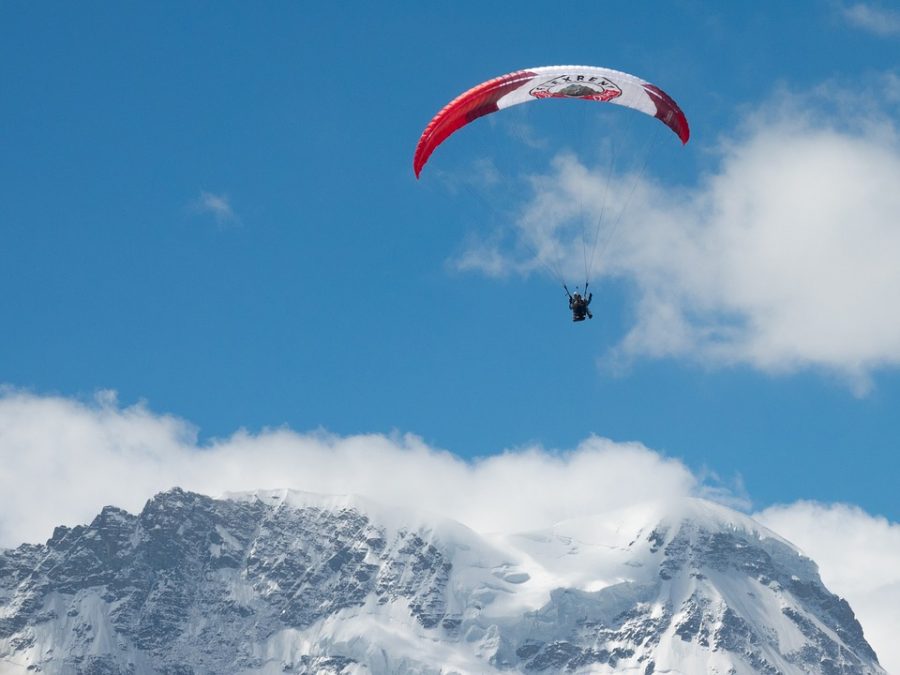 Paragliding Photo via https://pixabay.com/en/paragliding-paraglider-pilot-363833/ Under Google Labeled for Reuse

Gavin McClurg, an Idaho native, ventured across the Alaska Range paragliding in the summer of 2016. Gavin McClurg shared his story with Patagonia and National Geographic.

Gavin has been an avid adventurer his whole life and enjoys taking life risking stunts. In his article he states, “To understand this story, you have to understand that I’m not crazy.” Gavin then goes on to tell of some of the death-defying adventures he has been on, “We got knocked down and nearly run over by an ocean freighter sailing in hurricane force winds and 35-foot seas off Cape Mendocino, California.” Gavin’s courageous attitude toward life has often got him in many dangerous situations. Gavin even admits, “[He is] guilty of sometimes pushing too hard” and “…dreaming a little too big.”

When Gavin first mentioned his idea of paragliding across the Alaska Range, other paragliders responded with shocked responses. Many fellow paragliders asked questions like, “What about the bears?” “How will you cross glaciers and rivers” and “It’s too far north.” Another paraglider asked Gavin the question, “How will you cross the Denali National Park?” It is, in fact, legal to fly across a National Park, but it is illegal to land or take off from a park. Gavin had to consider all of these factors before his expedition could take to the air. It took him six years to plan this expedition, which has not been completed by anyone before.

Gavin McClurg started his adventure on May 13, 2016, accompanied by his partner Dave Turner. He carefully prepared himself for flying across the Alaska Range, which is 480 miles long. Gavin packed lots of food and warm clothes, to endure the harsh climate of Alaska. Dave brought a fishing pole and a gun on their paragliding trip; Gavin says that the gun was used for protection, not hunting. They packed up all their belongings in a backpack that weighed approximately 60 pounds, which also contained all of their flying gear.

On the second day of his expedition, they walked through glacial fed river for three hours, instead of walking 9 hours “post-holing.” In Gavin’s article he explains post-holing as, “…an activity whereby you walk one or two steps on top of deep snow, thinking you’ve finally found some stability and then WHOOSH, you break through the crust and sink up to your crotch or beyond and begin the whole process over, and over, and over again.” After the second day, with 470 miles to go, they set up camp and began getting ready for the next day.

On June 7th, almost a month after they started and with only 25% of the route completed, Gavin and Dave attempt to fly across the Denali National Park. The two partners climb a thousand vertical feet before taking off to fly over the national park. Once the two took off, Dave describes the experiment. Dave says, “Imagine for a moment the highest mountains in North America towering above you. The snow and ice in some places are miles thick… Denali is considered one of the coldest and cruelest alpine climbing objectives there is. Now imagine that you are flying, dangling under a piece of thin fabric with no sound but the wind and your variometer beeping as a strong thermal gust thrusts you into a dark cloud. You begin to shake with cold and you’re struggling to maintain your sense of direction and sense of up and down. Your eyeballs start to ice over. Everything is solid white; you are blind…Finally, you escape twenty agonizing minutes later. Your face and wing and harness are completely encased in rime ice. You get separated from your partner as you whisk past Denali…”

On June 13, Gavin was left alone because Dave had to return home due to other commitments. Gavin had only finished 60% of the expedition. For the next four days, Gavin flew by himself across Panorama Mountain, which had some of the most challenging terrain he had ever experienced. After he flew over a herd of caribou, he found a “thermal” (an upward current of air), that brought him 15,000 feet upward.

On Gavin’s 37th day of his expedition and the last day, he was making his way across a glacier. In his story, Gavin writes that he kept telling himself, “Be content. Be grateful. Be thankful.” At the end of his journey, Gavin made sure to stay content and grateful for everything. He ended his story with, “returning home makes me realize what’s really important. It makes me realize what I should really be grateful for. And it’s that lesson I will never forget.”